Handling of dried timber starts at the grading plant, where the kilned timber units with sticks are graded, end-trimmed and packaged.

The other commonly used name for the grading plant, trimming plant, stems from the fact that at this point the ends are trimmed and the pieces are cut to their final length – either to standard lengths or customer specific lengths.

At first there is a lift, which takes the goods (either on sticks after kilning, or rerun hard packs) to the first step of the process.

The conveyor systems moving the goods forward may vary somewhat, but as a rule there are a few intermediate stages, where the goods can be separated in order for them to end up travelling in the process one piece at the time. Sideboards are usually trimmed more for wane etc, whereas center cut pieces have only the very ends trimmed to achieve modular lengths.

Side boards are taken to sorting conveyor through the flow balancing conveyor system because the volume of side boards is bigger, in the average they are narrower, and they have more wane and other defects to be cut off.

In the high capacity dry sorting plants above mentioned balancing is often implemented with the combination of step feeder and unscrambler.  With them the sideboard flow is adjusted steadily for the lug loader and sorting conveyor. 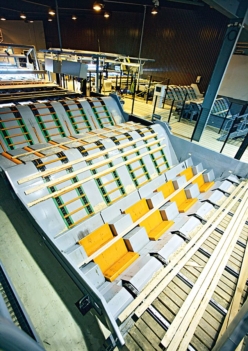 The step feeder and unscrambler at the dry sorting line. © Jartek Invest Oy

Sawn pieces are elevated by ensuring the correct height adjustment of lug. Top section of the last elevator is usually a little higher up than the main table, ensuring smoother moving of the pieces along the line. At the beginning of the line there is a screw roller, ensuring the end adjusting to the other end.

Centre- and thicker pieces can be transported from the tilt hoist directly to the lug loader with the by-pass transporters if so wanted.  Thus the infeed speeds can be increased, and also the corner damages of the lumber pieces can be reduced by avoiding the step feeders and unscramblers.

There are different techniques to separate the pieces to single, recognizable entities. The separation systems have evolved and especially the mechanical damage to individual pieces has been minimized – despite increased efficiencies and higher speeds in the process.

Next step is to determine the final grade and length of the pieces. The trimming decision is stemmed mainly from the quality grading point of view. Visual and manual grading are things of the past, so in practice the grading decisions are camera based.

Each grade has at each mill set parameters as regards to the number of knots, the size of knots, types of knots and any other defect, and the machine then executes the grading according to those pre-set parameters.

As a rule the grader maximizes the value yield of the piece: if it pays to cut off more from the length to achieve a higher grade then the computer sends this impulse to the process.

The actual trimming saw is usually a circular saw, which has blades set at 30cm module intervals. These trimmers can be hydraulic, electric or pneumatic. The cross cutters can also chop rejected pieces to 30cm lengths, which then drop to a waste conveyor underneath.

The actual trimming saw is usually a circular saw, which has blades set at 30cm module intervals. These trimmers can be hydraulic, electric or pneumatic. 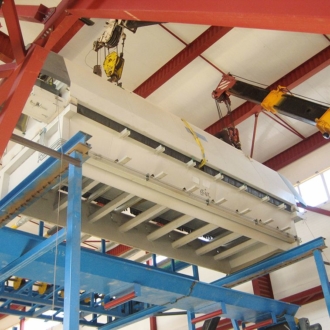 The picture shows the trimmer coming up to the sorting line. © Jartek Invest Oy

As mentioned before there may also be non-standard or customer specific lengths. Most of the modern grading plants can handle these types of goods as well. The advantage of these lengths comes usually from the fact that one does not need to trim off perfectly acceptable grade up to almost 30cm only to achieve module lengths. Revenue generated from sawn timber versus dry chips is manifold. Especially in joinery products’ like windows raw materials the module lengths are not necessary.

Grading plants can also be equipped with moisture meters, which read out the moisture content of each and every piece. At this point non-conforming pieces can also be separated from the main lot.

After grading and trimming the conveyers transport the pieces to their respective quality and/or length pockets. There are two types of pockets in use: vertical and horizontal ones.

With a vertical system, the piece is being dropped to its own pocket.

Most vertical pockets have got raising bottoms, thus minimising possible mechanical damage at this point. Once the pocket is full the pieces are dropped to a conveyor underneath and taken to the packaging unit.

In horizontal pockets different qualities are steered to one of the separate horizontal conveyors, all pieces tightly next to each other. The desired packet volume, once reached, is steered to packaging department on an unloading beam bridge conveyor.

The upward feed conveyor of the trays. © Jartek Invest Oy