Butt-end reducing as part of the debarking process has become standard especially in the sawmill industry in Finland, Scandinavia and Russia.

The biggest advantage of including buttend reducing as part of the debarking process is that the log does not have to be stopped for reducing. It simply travels through the line at the normal debarking speed (cf. cutter/butt-end reducer where the log stops during reducing).

The motor power of the Valon Kone reducing rotor is normally 200kW, which is two to three times more than the debarking rotor.

Moreover, holding the log during reducing requires a lot more holding force from the feedrolls than in the debarking process where the bark is only abraded away from the log’s surface.

Reducing tools are mounted on the rotor pulley rotating at a high speed (400–500rpm) and on the reducing ring through which the logs are fed. The reducing tools mounted by the side of the ring opening cut a maximum of 10 cm from the length of the radius. This means that the log’s diameter can be reduced by a maximum of 20 cm.

The debarker continuously monitors log diameters and the program automatically reduces the feeding speed with large butt-ends, if needed. The biggest possible reducer ring opening diameter is 60 cm, which means that the butt-end diameter can be 80 cm. The power of the butt-end reducing rotor has been designed for no longer than a one-metre reduction.

The diameter of the reducing ring opening cannot be adjusted during operation. When using the VK butt-end reducer, the operator has available rings of different openings (usually 3–4) which are used according to the diameter class of the logs to be fed.

The rings are locked onto the rotor pulley with a reliable mechanical locking system. The reducing ring lock can be opened and the ring changed using a separate hydraulic change-over device delivered with the debarker, which also functions as a storage holder for the rings. Changing a reducing ring takes around 5–10 minutes.

In the butt-end reducing rotor connected to the Cambio debarker, the cutting reducer tools can be adjusted to an appropriate position according to the log’s diameter class so there is no need for different-sized reducer rings. In the Cambio debarker, too, tool adjustment cannot be performed during operation and the rotor must be stopped for the duration of the adjustment. 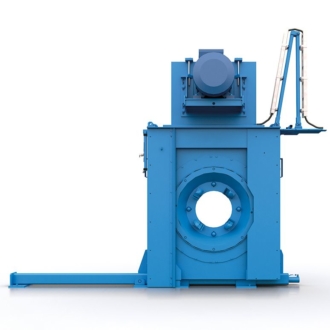 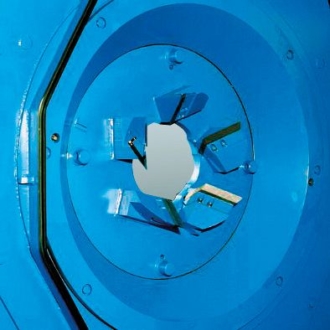 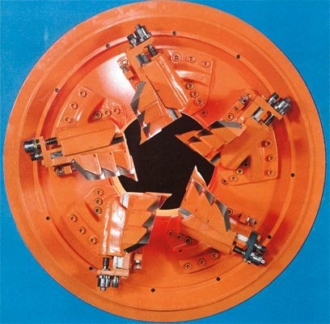 The fixed butt-end reducing rotor is mainly designed for sawmills where the debarker is always fed logs sorted by diameter (Scandinavia, Finland and Russia). If the debarker is placed at the beginning of a log sorting line and the logs to be debarked are unsorted, as is often the case in Central Europe, this is not the best option for log reducing. In general, reducing in a log sorting line is carried out by a separate cutter/butt-end reducer where the log is stopped in the machine for cutting.